A couple weeks ago ALASSCA had a meeting! By “meeting” I mean Adam and I hung out at his house and played some games, but we had fun and I would like to share some of that fun with you.

Adam invented this game which is kind of like Scrabble except different. You can play it by yourself, and it does not require a Scrabble board.

You begin with all of the Scrabble tiles face down on the table, and you start a timer running. You then pull out a number of tiles (maybe 10?) and try to arrange them into a Scrabble formation, i.e. making as many words as possible by overlapping tiles when necessary. As you use up tiles, you pull more tiles from the pile. Keep doing this until time runs out, say after 5 minutes. 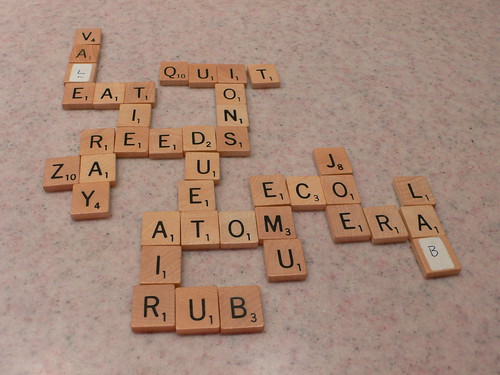 Then in the second half of the game, you try to rearrange all of the tiles that you have successfully used in words to make the longest words you possibly can. The scoring function for an abstract scrabble game is the number of tiles minus thrice the number of words. You want to make words that are at least 4 letters long otherwise they are not helping your score. It’s OK if you can’t reuse all of the letters from the first half of the game, it’s better to leave them unused than to make short words. You count up the score once the timer runs out again, say after another 5 minutes. 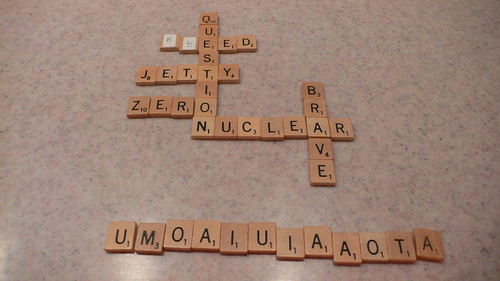 My score in this photo is 29-(3*6)=11. (I think? Is that right, Adam? I’m not counting the tiles I didn’t use in the second half, b/c if you did then you could maximize your score by not making any words at all.)

Adam generates threeandthrees by taking a list of nine letter words, randomly selecting twenty, and then returning their guts (the three letters in the middle). The goal is then to think of a word that fills in the gaps, i.e. a 9-letter word with those 3 letters in the middle. Some of these have only one solution, some of them have many solutions. Can you fill in all of these words?

When you’ve filled out as many as you can, see our answers in this Flickr photo.

I think that, since the semester is starting and there were some interesting developments this season, I should first endeavor to chronicle the games that came to fruition over the summer.

Patternfilling one of a few word disciplines that have resulted from me messing around with Lexpert, which could quite possibly be my favorite program in the world.  I believe that the Lexpert project started as a Scrabble player’s tool, but it also contains tools that can assist the crossword player, cryptogram cracker, and general wordplay enthusiast.  (It was a real boon in solving the Confounded Compounds!)

The inspiration for the concept of patternfilling actually came from a game of Literati that Ron and I played a few months back. Across the second row from the top were two copies of the letter I, placed one space apart, through which he created the word RICIN.  It got me wondering — how many similar words could have filled that slot?  In particular I was looking for five-letter words because of the restrictions on the board.  Thom and I searched for a little bit at his apartment the next day, lounging about, listening to Regina Spektor, and trying to fill the pattern ?I?I?.  Ricin, limit, timid, vivid, civic, … I think we wound up with sixteen or seventeen.  When I got home I finally had the genius idea to put it through Lexpert, which claims fifty-five matches for the pattern.

Then I started playing around.  ?O?O? gave sixty-six returns.  S???K — fifty-six.  Interesting words, too, like BORON and SMOCK.  I had an idea for how to make it a real exercise.  I wanted to keep the atmosphere of people lounging around and thinking up the words, but a strict back-and-forth isn’t feasible because one person will inevitably run out before the other one does.  Yet a free-for-all like Thom and I had isn’t really good either because whoever has more words off the top of their head will be favored in that case

The middle ground I hit upon was first played with Nelson, Karen, and I.  Players give words in turn, but only have 40 seconds (45? 60? We usually play 45 or 50 seconds when playing by IM, because timekeeping and typing is time-consuming) to come up with their word.  Once a player gives a word that fits the pattern, the next person’s time begins.  Once every player fails to come up with a word in succession, the group has one turn left to come up with a word to kick-start the rotation again.  If the group time expires without a word, the round is over.  (As I type this, I wonder if it would be better that, once everyone fails, it becomes a total free-for-all.  That is, once the final player’s turn has ended without a word, there’s a 40 second clock that ticks down to the end of the round, and once anyone says a word that clock resets, but there’s no more turn structure.  I bet we’ll play this way from now on.)

The first time we played we discovered an issue — if the final letter is a wildcard, invariably thousands of plurals are admitted.  But the point wasn’t to find cheap words that end in S. We’re supposed to be looking for cool words like RICIN and SWANK!  So more complicated syntax has since arisen, to help avoid the problem of cheap words and to promote more exotic patterns.  Here’s the syntax I’ve used for explaining patterns:

Patterns usually will contain a couple of these elements; often to get around the issue of plurals that we discovered in our first game we’ll add the restriction -*S to remove all words that end in S from the list.  (Perhaps a –P wildcard could be invented to remove plurals but keep other words that end in S that are legit like abyss?)  The ideal number of words on the list to wind up with is between 45-75 for two players and 65-100 for three players.  We’ve yet to patternfill with four people, but conceivably you could play the game with as many people as you’d like.

There is one other, perhaps glaring problem with this game, and that is that it’s Lexpert-dependent and can’t be played without the program.  There’s not much I can say to defend it: it is Lexpert-dependent.  Lisa suggested that perhaps I should put some lists together, edit out the obscure words (what is LIPIN, and what is it doing in my ?I?I? list?), and create a Flash game, and that’s actually an excellent idea… if there’s enough lists to make it worthwhile.  The other issue I see is that doing an exercise like this will group the words that fit the pattern together in one’s mind, so I bet that a player’s score will increase markedly when presented with the same pattern multiple times.  This means that the game has practically no replay value (to me).

I’ve left a few patterns for the reader here.  If you’re filling them by yourself, in parenthesis are goal numbers of words to try to come up with.  If you get more than the goal number, you’re doing pretty well. For solo play, I don’t think a time limit should be observed.

I think it makes the most sense to just pick it up from the middle.  I was pretty much forced into creating this by Nelson when I taught him the wordplay exercise that follows.  As I see it right now, the plan is to, over time, introduce all of the games that have become part of my canon and note the totally unnecessary research that I’ve done in the past.

So, first, the promised game.  This game was in some way conceived from Mr. Coyle’s Transadditional Pyramid, which deserves its own entry and will get one later.  It began as an exercise in chaining five-letter words together: CRASH to SHARD to HARDY and so on.  So you’re allowed to change one letter and rearrange the remaining ones.  There’s no real restriction on making “cheap” changes like PORED to PORES, but I generally attempt to avoid them.  You’re never allowed to repeat a word that’s already appeared in the chain.

What you’ll find when you do this is that it goes on forever.  Which is neat.  But generally uninteresting from a gaming perspective.  So then (maybe it was Mike or Thom that came up with this) we decided that we would force certain words to be in the list.  The idea originally was to create a tug-of-war kind of game, where I would be trying to make one word and my opponent is trying to make another, and we’re using the same chain — but this doesn’t make sense even in theory, because keeping the letters of the opponent’s word out of the chain would be very simple.  To my knowledge a varient of this game that revolves around that concept has never been created.

What we instead have patented is the following process: Before beginning the game, the player decides upon five five-letter words (serious people play with six but I’ll phrase the rules in terms of five).  These words must differ from each other by at least three letters.  So you’re not allowed to use the words PARCH and CHARM as two of your five words.  (This winds up being quite a challenge in itself!)  Four of your words are the goal words; the fifth is your start.  You must create a chain that contains all four of the goal words beginning with your start word.  There is no score for the game; you assess your game when it is over by either deciding victory or otherwise.  I’m sure you could find the shortest path through them if you really wanted to, but that’s not really the point in my mind.  To this end I try to avoid erasing plays unless I see no other way to finish the game.

Here’s the game I played that I showed Nelson (circa 05.12.22).  Hopefully you can pick up on my notation very rapidly.