I was just updating this poor neglected blog to the latest version of WordPress when I noticed that it doesn’t have any pictures of people playing stairball on it! Last week I played stairball (for the first time in a year or two) with my partner Maggie, on the steps behind the Philadelphia Museum of Art.

Maggie did quite well for her very first time playing stairball, outscoring me consistently in almost every inning and defeating me 27-24. As you can see in the pictures, we only played from the first landing to the bottom of the stairwell (12 steps total), rather than attempting to use the entire monumental stairway. (The official stairball rules recommend playing on no more than 15 stairs, although both players can agree to use a larger staircase.) The large amount of fallen leaves covering the steps interfered unpredictably with bounces, leading me to wonder if it was worth cleaning off the part of the stairway we were playing on. I decided to leave the leaves alone, considering this obstacle to be part of the stairball court, like a hazard in golf. When we were done playing our hands were freezing, as neither of us wanted to risk gloves interfering with our control of the ball.

One thing I like about stairball is how it provides an incentive to travel to interesting places and spend significant amounts of time contemplating the view from the top of a stairway. (The view of the art museum from the bottom wasn’t bad either!) Too often we travel through places en route to some important destination and fail to take time to appreciate a location in its totality.

It’s unfortunate that you can’t get a good sense of what gameplay is actually like from these point-of-view pictures. For slightly more illustrative pictures, here are some photos from a game between Kamraan and Karen back in 2009: 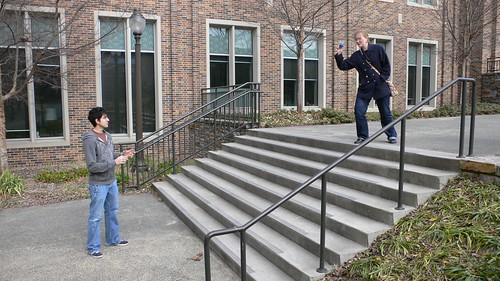 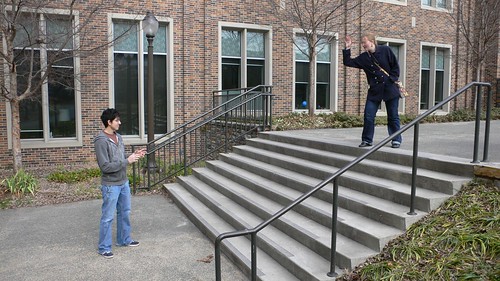 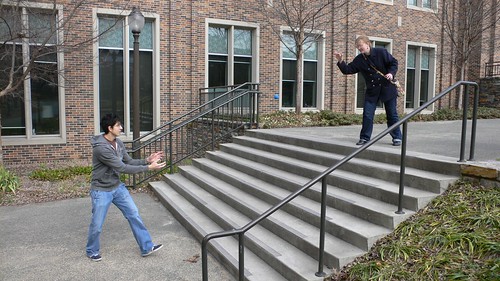 Here Karen appears to be on her second throw of the inning, intending to bounce the ball off of exactly one step. (The first throw should hit zero steps, i.e. she would have thrown it directly to Kamraan.) Kamraan dutifully catches the ball, helping her count the number of the steps she hits for scoring purposes, and returns the ball to her to try again. (Unless she hit the incorrect number of stairs three times, resulting in three strikes and Kamraan climbing the stairs to take his turn throwing the ball down the stairs.)

If you aren’t already familiar with the rules, please refer to the official stairball rules for more details.